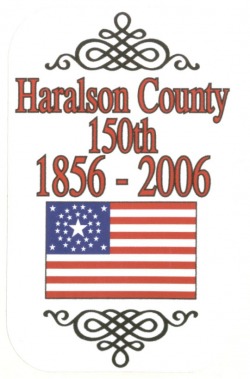 Amateur shutterbugs who err in placing their subject against an enormously brighter background, without taking counter-measures, find to their chagrin that only featureless stencils of their intended subjects can be discerned in the result.  The terrible war of 1861-1865 between the Federal and Confederate governments is like a bright sun which back-lights the immediately preceding years, commonly reducing the latter to a mere featureless stencil.

It was the purpose of our project to mask out this sun as best we could and take a close look at the world of 1856.  That year is special to us, because it is when our Alabama-border county was created.  Our county seat is named after the man winning the US Presidency that year, the tragic and now obscure James Buchanan.  He garnered over 80% of our votes in the election, a vastly larger fraction than virtually any other Georgia county cast for him.  Why?  Our original scholarship, a non-trivial part of this educational exhibit, explains.  The election dominates our reconstruction of 1856, but not to the exclusion of a rich panorama of all the things which made life full for the Georgians of those times.
Our home, Haralson County, is even today a rural outpost on the border of Metro Atlanta, and 150 years ago in 1856 it was a frontier community of under 3,000, separated a mere generation from its Cherokee Nation heritage.  Life was challenging and few people had the means to pass down information and artifacts which could survive into the 21st century.

Nonetheless, we feel we have been able to reconstruct the American which the people of new-born Haralson County knew.  In the process, we have uncovered interesting things about our part of Georgia - like the fact that the only son of Savannah in the 1856 presidential race knew our area as a young army officer, and helped deliver the land into our hands - but would not be given a place on the 1856 ballot here.  While no Haralsonian of 1856 speaks in our project, the written testimony of a woman who lived only a day's ride away near Cartersville paints a revealing portrait of the times in this frontier section of the state.

The foundation of our Sesquicentennial celebration is the website we created, which we call The 1856 Handbook.  It provided the source material for our historical pageant, in which we dressed and acted the parts of people in 1856 and ran a mock presidential election, complete with candidates.  Youngsters in the local schools wrote fictional essays in which they explained "What I Was Doing in 1856".  While we aspired to celebrate our local history, we dream the enduring online legacy we have produced is of educational value to people in the entire nation.  We humbly hope you might agree.

While the slavery debate was the leading issue of the 1856 election, it was not the only vital one.  We explore the complexity of 1856 politics, and liberally quote the words of voters and politicians alike to help explain.  At our mock election polling booth, we exhibited original historical fiction - a speech text by each of the three presidential candidates to Haralson County voters.

Our website cannot be appreciated as a stand-alone optical disc publication, much less as a printed document, for we have labored to exploit every advantage which live hyperlinking enables - anticipating the emerging ubiquitous wireless broadband world the coming generation will take for granted.  (But for your convenience, we provide a sampling of our webpages on paper - albiet stripped of color, sound & motion.)  We draw on archival materials from facilities around the world wide web to provide music, photos, video, and the best of text resources.  We sought the best artifacts which explain the world of 1856, e.g., we steer you to our neighbors in southwest Georgia and their splendid 1850s outdoor museum, Westville.

In the large majority of cases, the primary source material we cite, hyperlink or excerpt was published in 1856 per se.  Go to our page on music and hear the melody of Gentle Annie by famed songwriter Stephen Foster, which recounts the tragic death of a young person, so common in those times.  Click on the links to hear the other "hits of 1856".  Learn about life on a farm before electricity and tractors by watching movieson pre-industrial Dixie agriculture linked from the page Our Daily Bread.  Then look at the antebellum daguerreotypes of folks following trades off the farm, and imagine how hard they worked for the photographed 1856 penny.  Examine the page on Presidential campaign songs to read - and hear - how the three main candidates taunted one another through catchy tunes n an age before radio and TV existed as political tools.

Our website is richly illustrated with scans of 1856 literature, wood-prints, photos, maps, and graphics of many kinds.  They are included for insight - but often also manifest beauty, too.  Because material published in the 19th century has escaped the tenure of copyright, we can liberally copy same at little inconvenience and no cost.  You'll find photos of the 1850s - not only of the white Presidential candidates and tradespeople but also of African-Americans and Native Americans.  And even though 1856 was a "man's world", the political impact of exceptional women is made manifest, too.

The 1856 Handbook tries to give various historical points of view the opportunity for sympathetic portrayal, even if many or most people today have very different personal inclinations.  We also try to educate today's reader about things of which our 1856 predecessors knew nothing, and so we do.  Finally, there are many things about life in 1856 which stir no stronger feeling than curiosity and we have labored to see these aspects of life are given their due attention, and are not crowded off the stage by the passions of morality, politics and war. 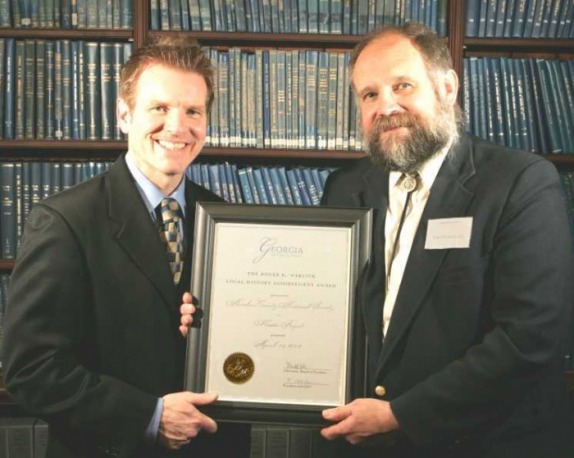 Dr. Stan Deaton (left), Vice President for Programs and Scholarship of the Georgia Historical Society and Dr. Ron Feigenblatt (right), editor of The 1856 Handbook and representative of the Haralson County Historical Society, winner of a 2007 Roger K. Warlick Local History Achievement Award
<-- back to Exhibits