On the first Saturday in August (the 4th) our library will conduct a used PC sale between 2 and 5 PM to raise money - and get perfectly usable old PCs into the hands of people who could use same. There will be substantial discounts below guesstimated values.

Be sure to tell the people you know - especially students returning to school.

Book Review: The Clustered World: How We Live, What We Buy, and What It All Means about Who We Are 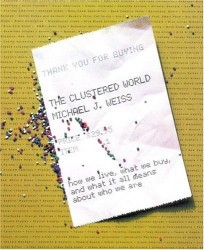 This is hardly the most profound or well-written book ever written. But I have elected to bring it to your attention this month because of the import of its subject. Information technology has become so cheap and powerful over the decades that the creation of detailed profiles of communities - and even households - are now common tools not just for scholars and spys - but for prosaic users like those trying to figure out where to site a store, find a contributor or locate a sympathetic voter.

This particular book, the most recent of several by the same author on geodemographics, is something of an informercial for a prominent commercial player in the field, Claritas. But at the same time it provides a general understanding of such activity. A review appearing in The New York Times, deflating the pretensions of the author, is available by clicking on the book cover image above; it also include the full-text of the first chapter. Eleven lay reviewers at Amazon Books give this title an average of four of five stars.

A previous similar book by the author explains the premise of the subject so:

The '50s era of mass culture was an aberration, and it didn't last... Upheavals of the current generation - suburbanization, globalization, technologies that collapse time and space - continue to dilute the notion of community based on proximity and shared concerns... The self-absorption of Americans, cocooned in their homes and immersed in their electronic gadgets, had [by 1990] exacerbated the lack of cohesion within each neighborhood... According to the geodemographers at Claritas, American society today is composed of sixty-two distinct lifestyle types... These clusters are based on composites of age, ethnicity, wealth, urbanization, housing style, and family structure... And advances in database technology that link the clusters to marketing surveys and opinion polls are permitting more accurate portraits of how these disparate population groups behave...

The book goes on to rationalize the economic incentives of such activity this way:

Each year, some 14,000 new products are introduced in the U.S. Marketplace -- and 80 percent will be gone within a year... Each American sees an estimated three thousand [advertising] messages daily... ...The information-gathering business is booming, projected to grow to a $10 billion industry this year... [and] many companies that operate data warehouses containing information on consumers use cluster systems... In the U.S.A., marketers now spend an estimated $300 million annually on clustering techniques, which have become well-accepted tools in targeting direct-mail campaigns, selecting sites for new stores, and profiling the behavior of the nation's 100 million households... And more than merchandising can benefit from use of this type of data. According to the book:

Few states have done more in the area of social marketing than Georgia, where the Division of Public Health has cluster-profiled the state's entire population to assist in opening health clinics, targeting prevention programs, designing promotional messages, and determining local health needs. The book at issue makes the point that nowadays there is comparable geodemographic data for all the affluent nations of the world - not just the United States - and goes on to explore the cluster groups created for overseas nations.

But for our purposes, it is interesting to look in the opposite direction - toward the local

I have monitored the categorizations which Claritas and others have published in recent years. Some of this information has been easy to find online for free since the turn of the century.

In May 2001 MSN provided a service called MSN HomeAdvisor which cited statistics for 30113 using the Claritas "PRIZM" clustering system. The PRIZM system assigns an ordinal number to each of the 62 clusters, with those of higher socio-economic status (SES) lower in number. It said over 99% of our households fell into one of just two of the 62 clusters in this system:


By November 2003, the same PRIZM system distinguished a third cluster among the "five most common" (sic.) ones within 30113. The previous two clusters were joined by number 58, "Blue Highways," a group of "Blue-Collar/Farm Families" - but no numerical fractions were made available for free. They were listed (without explanation) in the following order; perhaps this order reflected relative frequency - but it also was alphabetical.


Also in November 2003, data using Claritas' new alternative PRIZM NE 62-category clustering system was made available. The "five most common groups" in 30113 were listed in this order - perhaps in order of descending frequency?


In June 2007, I again looked up the PRIZM NE clusters for zip code 30013. (There are now 66 classified clusters in the system.) Our five listed clusters are shown in what is explicitly called alphabetical order, so I don't know which is the most common. Here they are:


To learn more about the typical household characteristics of each cluster segment, look here. In terms of a verbal SES, Claritas says Back Country Folks are "low" and Crossroads Villagers are "downscale"; while both of Blue Highways and Shotguns & Pickups are called "lower mid." Finally, Claritis designates Big Sky Families as "upper mid" SES. Claritis and book author Weiss say that Back Country Folks - whom in 2001 MSN HomeAdvisor said made up over 7 of 10 households of zip code 30113 - are

found in high density in places like central Pennsylvania and northern Alabama... The residents tend to be poor, over 55 years old and living in older, modest-sized homes and manufactured housing. Typically, life in this segment is a throwback to an earlier era when farming dominated the American landscape. From the point of view of library supporters, there is a telling anecdote about one community of Back Country Folks. It goes this way:

When a town librarian 'tried to get local commissioners to approach matching federal funds for a new library, "their view was 'We don't need no library.'" It took three votes before they finally approved the measure. Non-profit organizations also gather and publish extensive statistics these days.

The Georgia Department of Education provides information on local schools and systems, including the Haralson County system and the two schools it operates within zip code 30113 per se, Buchanan Elementary School and Buchanan Primary School.

And the problems of children and families are the focus of data from the Family Connection Partnership via the Annie E. Casey Foundation. Statistics are not broken out for zip code 30113, but are available for Haralson County as a whole.

An alternative geodemographic system, ESRI's Acorn system, provided a limited amount of economic data for zip code 30113 vis-a-vis the US in November 2003. It was typical for a rural area in this country:

Note:Sperling's BestPlaces says that the cost of living in zip code 30113 is only 77.2% of what it is in the United States as a whole. (Housing costs are especially inexpensive in 30013: the index is only 43% of the national average!) That means you only need $35,987 of income in 30113 to live as one does in the United States on average with an income of $46,615 - or in other words, the "real" median household income in zip code 30113 was about 96% of that as the nation as a whole in 2003. It doesn't look like zip code 30113 is really poor at all, given how modest living costs are! Very extensive free statistics on zip code 30113 - including detailed histograms of households incomes and house values are published by City-Data.com online here. It is interesting that it reports nearly 2 in 5 residents of zip code 30113 lived in a different house only five years ago. Among these movers, most were resident in another county, and over one in six in another state. So maybe the area is changing faster than some people imagine - through migration. (City-Data.com is mysterious about what it calls its wide variety of sources; I have also found that an aggregated number they publish can be outside the distribution of numbers for all of the subsidiary categories!!!)

How finely resolved is the data which Claritas and similar firms can provide? Claritas asserts the following here

"PRIZM--The New Evolution (PRIZM® NE) culminates years of research and development in a groundbreaking methodology that allows marketers to seamlessly shift from five-digit ZIP Code... all the way down to the individual household level--all with the same set of 66 segments." In other words they say they may well "have my number" - and yours, too. As a tease, I will refer you to a more recent book which addresses the discomfort you may now be feeling: No Place To Hide

George Orwell envisioned Big Brother as an outgrowth of a looming totalitarian state, but in this timely survey Robert O'Harrow Jr. portrays a surveillance society that's less centralized and more a joint public/private venture. Indeed, the most frightening aspect of the Washington Post reporter's thoroughly researched and naggingly disquieting chronicle lies in the matter-of-fact nature of information hunters and gatherers... The mutually compatible skills and needs shared by private and public snoopers were fusing prior to the attacks of 9/11, but the process has since gone into hyperdrive...
<-- Back to Newsletters