Jana Gentry, our library manager, enjoys selecting the books that will be added to our locally held collection. But that doesn't mean she is deaf to nominations others make for new acquisitions.

During the summer months I was in Georgia's Rome on a small expedition and took the occasion to visit a large national-chain bookstore in the city. This reminded me of a fascinating volume published over a decade ago - a book I had no time to review when it first came out. As Thanksgiving loomed, I told Jana that I thought it would make a particularly appropriate seasonal addition to the library. The wheels of bureaucracy have turned and it is now on display with our other new arrivals.

This "coffee-table" book is Material World: A Global Family Portrait. It is dominated by photographs of a typical family in each of 30 nations of the world circa 1994, from that now-receding sliver of time between the fall of the Soviet Union and the explosion of the global consumer Internet. The keynote photograph of each family has them assembled outdoors in front of their dwelling with (nearly) all of their domestic material goods on display, as if in some sort of bizarre Judgement Day lawn sale.

Unlike tables of numbers or collections of graphs that make the eyes of many people glaze over - or heartbreaking 30-second television ads that ironically make the people most moved by them want to avert their eyes - these matter-of-fact annotated photo collections paint unemotional galleries by which it is easy to immediately comprehend how people live in the full panoply of nations around the globe of our time.

In the frozen landscape of Christmas-advent Iceland stands the wealthiest family, the Thoroddsens - with their musical instruments, non-working horses and the many other things the per capita income of US$23,324 in their nation can buy. Mr. T pilots a transcontinental airplane full-time for a living, working 18 to 22 days per month. His favorite toys are the two small private airplanes he owns. Mrs. T supplements the family income designing custom hats, as time allows, after keeping the 2000 square-foot family home and raising the four children. Even before the Internet age, a computer joins their two TV sets, two radios, and one each stereo and VCR - as well as the hundreds of books that span an entire wall indoors. There is one car for each adult in the family.

In contrast, while the greenery of February Ethiopia looks more inviting to the naive eye, the seven members of the poorest family, the Getus, standing in front of their 320-square-foot thatch-roof home, scrimp by in a land where the raw per capita income is only $123 a year - less than 1% of what it is in Iceland. Clearly a dollar buys much more here than it would in Iceland, but the Getus are profoundly poor nonetheless. With no plumbed water, gas, electrical grid, motors of any kind - nor even a humble wheeled cart - these people depend on their own muscles and their many animals: 8 chickens, a sheep, a lamb, 2 donkeys, 3 horses, 2 oxen and 5 cattle. Much of Mrs. G's time is taken up with the daily chore of collecting fresh cattle dung and mixing it with straw to make a paste, some used to plaster the house walls and some used as fuel. In one photo their 8-year-old daughter balances on her head a "hat" much less pretty than those Mrs. T designs in Iceland - a straw basket bearing a pile of dung pieces which together must weigh as much as the little girl. She stabilizes this with her left hand - her right hand is preoccupied holding a smaller similarly laden basket about chest-level.

Mr. G works 80 hours weekly, while Mrs. G puts in 126 hours. Their austere hut miraculously includes a radio, but its batteries are as deadas their realistic hopes for a better life. No writing or printing of any kind - much less electronic recording - enriches their lives. The closest thing is the home-made decoration-pattern fashioned with water-borne ashes on their dung-paste-walls. While there are a few literary items in a local free school, supply fees make attendance by the family's children impossible. Aside from the nearby Ethiopian Orthodox church, there is really nothing much beyond their home for them to enjoy or even use.

But perhaps the relative poverty of the Getus compared to the Thoroddsens is only truly made manifest when one considers things beyond their personal material goods. For example, Iceland has 85 times as many physicians per capita as does Ethiopia, and the people in Ethiopia are much sicker than those in Iceland. Nearly one in eight Ethiopian babies die in infancy, compared to only one in 200 in Iceland.

The book not only teaches us about wealth and poverty, but how practical issues generally trump supposedly inviolable ideological imperatives. In Muslim Mali, the people are too poor to afford even something as simple as a millstone in this hot, sandy Sahara nation. So young women are put to crushing grain into flour using tall pounding cylinders and their own muscles. They can work topless out in the open, their attractive breasts fully exposed for the photographer to record. Their men are evidently not driven into fits of passion, consumed with "sinful" thoughts. Indeed, some of the men are shown to be too busy sitting around in their elegant outfits, enjoying the annual Ramadan observance. The Natomo family's husband has two wives and one might suppose he gets his fill of female company after hours anyway.

Material World: A Global Family Portrait was published by the "conservationist" Sierra Club, with the help of the United Nations Population Fund. But it used a wide collection of photojournalists and one is not burdened by a single voice trying to endlessly and repetitively drone a simple-minded message.

The world has moved on since this book was published barely more than a dozen years ago. Pacific-rim China is now much richer and the basic tools the photojournalists used, film-based still cameras and analog-tape camcorders, are now replaced by digital alternatives. But while electronic media like the Internet are making the world much more aware of how people live elsewhere, the diversity of human culture on this planet hasn't really contracted. Those possessed of the conceit that a simple externally introduced change, perhaps imposed by concerted violence, can immediately remake a culture with millions of people in it, may grow more modest in their ambitions after studying this book.

People should not be surprised that those who aspire for a better life often seek to emigrate to another place where things are less hopeless. It is so very hard to remake whole worlds - much less in one's lifespan and those of one's children. Perhaps that is the greatest promise of what we call education. In wealthy nations like the United States, where people have many choices, education shouldn't just be a means of helping youngsters adapt to the world in which they are born. It should also help them to move into more successful trades, societies and locales - after it helps them learn that such exist and new ones will emerge.

Since this book was published, we have come to enjoy the Internet in the majority of our American homes. At online bookseller Amazon, customers offer 37 lay ("ringer"?) reviews, giving it an average of 5 out of 5 stars. One of the comments:

Material World is one of those books that EVERYONE should read. It really is beyond description... deceptively simpl[e] yet incredibly moving in its stark simplicity... It opens ones eyes to how MUCH we have here in the U.S. - even people considered 'poor' here have much more than the majority of families in this book. It also shows that having more doesn't necessarily bring happiness...

A PBS site on the Internet also lets you get a taste of the book by looking at five of the book's thirty families. 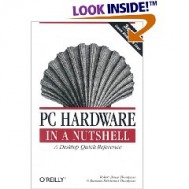 From time to time, people contact the library to ask about building or upgrading personal computers, or PCs. To serve this clientele, our library now boasts a magnificent, comprehensive and surprisingly inexpensive technical reference, PC Hardware in a Nutshell: A Desktop Quick Reference. This 2003 paperback volume is the third edition published and will be of value for many years to come - as long as you bear in mind prices will fall and new technologies will emerge. Our main reading room computers still run operating system software which was five years old when this book was published.

The publisher, O'Reilly Media Inc., built a solid reputation among computer professionals long ago as one of the premier purveyers of timely, well-written, and practically oriented technical material. It filled a gaping hole left by comically insufficient free bundled computer and software manuals, and did so extremely well.

The traditional title phrase "in a nutshell" is surely figurative: The book boasts 850 pages of tighly written prose, diagrams, tables and photographs. If you need detailed and knowledgeable information about what goes on with the machinery inside your PC, this is the place to look. Amazon customers give it an average of 5 out of 5 stars in 33 reviews.
Do you have a favorite book - either a new publication or a classic you'd like to share with more people? Then we invite you to send us a short book review explaining why it is worthy of reading and might make a good addition to our library.
<-- Back to Newsletters