Buchanan On Parade is a 70-minute film from Harold Jeffers Productions, now the property of the Buchanan Masons, which has been made available for unlimited use by the Haralson County Historical Society as a fundraising vehicle. Filmed between 1957 and 1961, this feature portrays everyday life in Haralson County during those years.

______________________________________________________________________________
During the first decade of the 21st century, various attempts were made to caption the film, so as to identify people, places and things within it. The last major effort was undertaken by Ron Feigenblatt, and is the only one which has resulted in any documentation. Three times he hired a member of the local community with potential sentimental motivations to transcribe the handwritten notes produced by the method of testimony described below. Sadly, despite a clear description of the job and wages at hiring time, each time the person hired resigned through protracted inaction before doing any work. Insufficient funds were available to interest the Center for Public History at UWG in this work. Therefore, instead of captioning the film with consistent identifications derived from the testimonial notes, as originally planned, the Society has simply published the scanned handwritten notes online.

With the rise of online video and a growing population with the very minimal digital literacy needed to access it, the Society has now elected to publish the film online. It has also created an online discussion forum at which testators can record the types of identifications desired by this project. 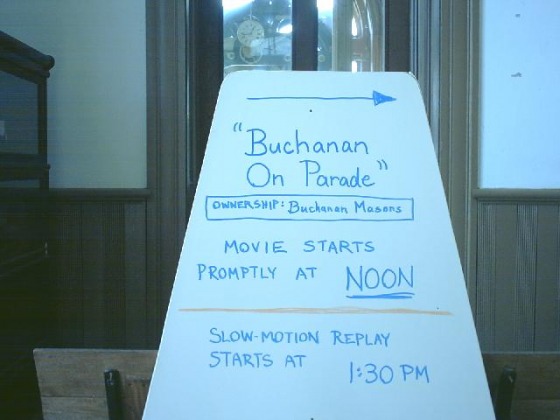 The showing took place midday. Since there are no blinds in the courtroom, it was not practical to use a borrowed video projector. Instead we used two "direct view" TV sets, one for each half of the wide courtroom. One was 25", the other only 19". Both were fed from the same DVD player and VCR. The jury box allows one to run cables without exposing a tripping hazard. But the stage needs a down ramp for people in wheelchairs who come to the room by elevator. 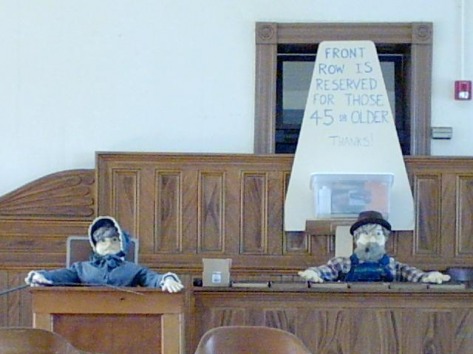 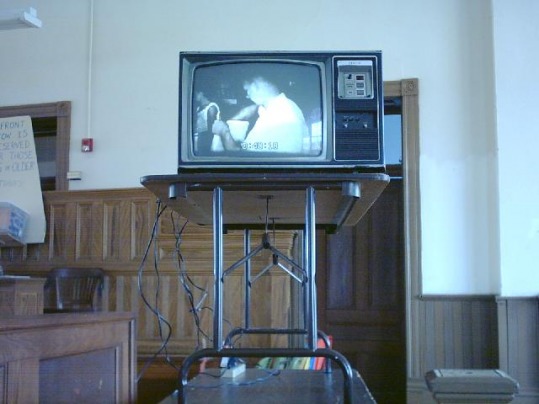 I gave each gentleman a printed copy of Peggy Kimball's recent article on the history of Buchanan, online here, which features the story of the Arrow plant.