The text immediately below dates from circa 1983.  The hotels described do not stand today.

The caption of the photo below is inconsistent with the text above. Evidently the hotel seen at the left of the photo was then called the Boat(w)right Hotel. 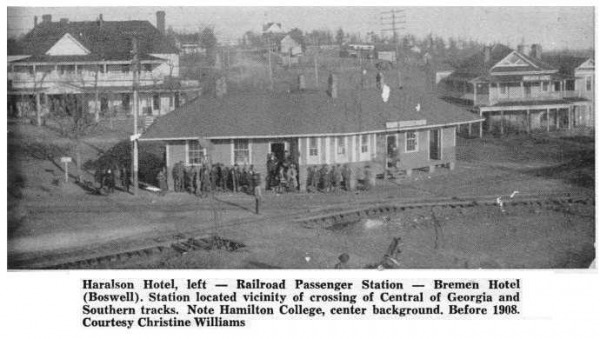 The map below shows the location of the photographed railroad station site above with a blue marker.
As of 2008, the model in the photo below is partially disassembled and being stored by the Haralson County Historical Society. 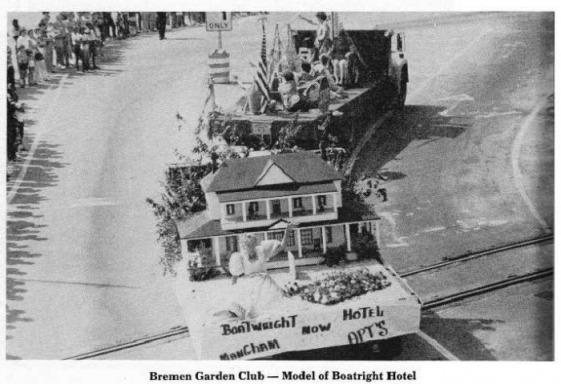 The Haralson County Historical Society endeavors to respect the intellectual property of all parties. It welcome feedback which enlightens it about the ownership of any such rights which are hidden or incorrectly alleged. This page remembers the history of the early hotels of Bremen, GA. To do so, it republishes a very small part of an ephemeral publication titled: Bremen Georgia 100 Years 1883-1983.

This work was evidently published during or after 1983, but there is no copyright notice nor is any publisher explicitly identified. But one might infer the publisher was a transitory group, now a quarter-century vacated, called the "History Commitee," which was led by Chairman (sic.) Barbara Rivers. Its full membership was identified on page 135 of the work with a captioned photograph . The Society would be only too pleased to hear from someone authorized to speak for this group.

The Society feels the History Committee intended the work they produced to enjoy an existence as broad and enduring as possible within their financial abilities. The advent of the World Wide Web has opened new doors for this mission and we feel the History Committee would be nothing but pleased to hear of the license we take in republishing a part of their efforts here.